Yep. You read it right.  Hungry?

Toilet seat sausage. You know.  The kind you find by the lunch meat, next to the prepackages sausages. The one that is shaped exactly like a toilet seat.  Some call it kielbasa, or smoked sausage, but here we call it toilet seat sausage; named appropriately, many years ago, by one of my girls that made the rest of us aware of the obvious comparison that hadn’t yet been realized.  Toilet Seat Sausage.  It’s pretty tasty stuff.  Most of the time.

I will admit, there is a quality control issue to be addressed with toilet seat sausage, if you care about that kind of stuff.  I have found the texture and flavor to be MUCH better in the brands that cost a little more than the generic, store brand options, and also in the ones that are more fresh.  So, look for a better than bargain basement choice, and also the package that is at the back of the shelf. It is worth a dollar and an awkward reach.

Whitney’s (Unmerited, likely Useless) Tip:  On all perishable goods, including produce, lunch meat, dairy, baked goods etc, the grocery stores obviously stock from the back, so, your most fresh items will be at the back or top of the shelf.  The most hard to reach place is where the good stuff lies. Last time I was buying  lunch meat (off the shelf) I checked my theory and the packages at the front of the shelf had an expiration date nearly two weeks sooner than the ones at the back.  Eww.  It’s worth the reach.  Just think how much longer your produce will stay good at home if you get it when it is just fresh to the store! (Don’t think about that turkey that you just ate that had likely been on that shelf for a couple of weeks before you ate it…seriously….don’t think about it)

Back to the sausage de commode. I actually have several things that we use toilet seat sausage for, and I had planned an entire post dedicated to it. It truly is an easy weeknight meal go to ingredient. For now, I want to get down on ‘paper’ the soup we had on Halloween night and a couple of times since then.

Slice up your sausage, set aside.  Clean your leeks by cutting off the ends, slicing down the middle and running under water until free of all the dirt and sand.  Slice leeks thinly.  Peel and chop carrots into small pieces, and do the same for the celery. (this is one of those times that other veggies could be easily substituted, or added.  I really intended on adding kale to the pot near the end, but I forgot. Use what you love.) 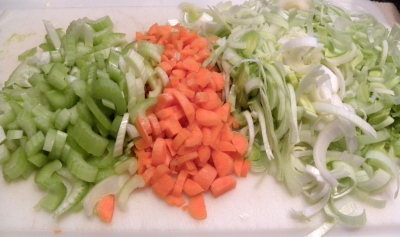 Heat a dutch oven on the stove over med high heat. When the pan is hot add a small drizzle of olive oil and toss in your sausage.  Cook for just a couple of minutes, until the sausage has just started to brown.  When they start to get a little color on them, remove them from the pan and set aside, leaving any oil in the pan.  Add the leeks, carrots and celery to the pan.  Season with salt and pepper.  Reduce heat to medium and saute the veggies until they have softened, about 5 minutes.  (Optional: at this point, if you want a tiny bit of heat in your soup, add in a dash of red pepper flakes) Mince the garlic and add it to the pan.  Give the veggies another stir or two and then add your sausage (with any juices that may have accumulated) back into the pan.  Add your thyme and chicken broth.  Bring to a boil.

At this point you have options.  You can turn the heat down to very low and let it cook slowly. Add more chicken stock if it gets too thick.  The longer it has to cook, the better.  Once it’s cooled, from this point, you could freeze it, or refrigerate it until you are ready to eat it. I would let it cook for no less than 15 minutes before moving on to the next step if you plan to serve immediately.  When you are 20 minutes out from eating, bring soup to a boil then add in your potatoes.  There is a lot of salt in the sausage, so be careful to not overseason, but, the potatoes will absorb a lot of salt, so make sure to taste it as it cooks to know if you need to add more.  Around 20 minutes, when the potatoes are tender, the soup is ready.  If you let it go a bit longer, the potatoes will start to break down a bit and begin to thicken the broth. That is one of those preference things. Do as you like.

Serve HOT! (I hate soup that is not hot)

This week I also served it with a garlic bread that I made quickly after the potatoes were in.

In a bowl, add a stick of butter (or substitute), 3T chives, 1/2 t salt, 1/4 t pepper, 1/4 t paprika, 2 minced garlic cloves.  Mix together and spread on a loaf of french bread cut lengthwise. We had a bunch of butter left over.  Just wrap it up for later. Place buttered bread in a 375 degree oven until crisp. About 10 minutes. Slice and serve.

I swear it’s easy. And tasty.

Let me know what you think about toilet seat sausage!!!! 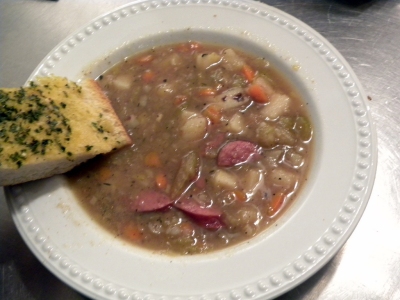